Recent National Science Foundation (NSF) data highlights stark differences in the growth of domestic versus foreign STEM doctorate recipients from American universities. The number of STEM doctorates received by temporary visa holders has increased much faster than those received by U.S. citizens and permanent residents over the past 10 years, at rates of 35 and 11 percent, respectively.

In some fields, the divergence is very large (see figure 1). In computer science, domestic doctorates grew by 5 percent, while doctorates earned by foreign-born students rose by more than 75 percent. The data for other fields tells a similar story, with the gap in the growth of American doctorate degrees granted to domestic and foreign students reaching 48 percent in math, 30 percent in health, 23 percent in chemical engineering, and 21 percent in mechanical engineering. 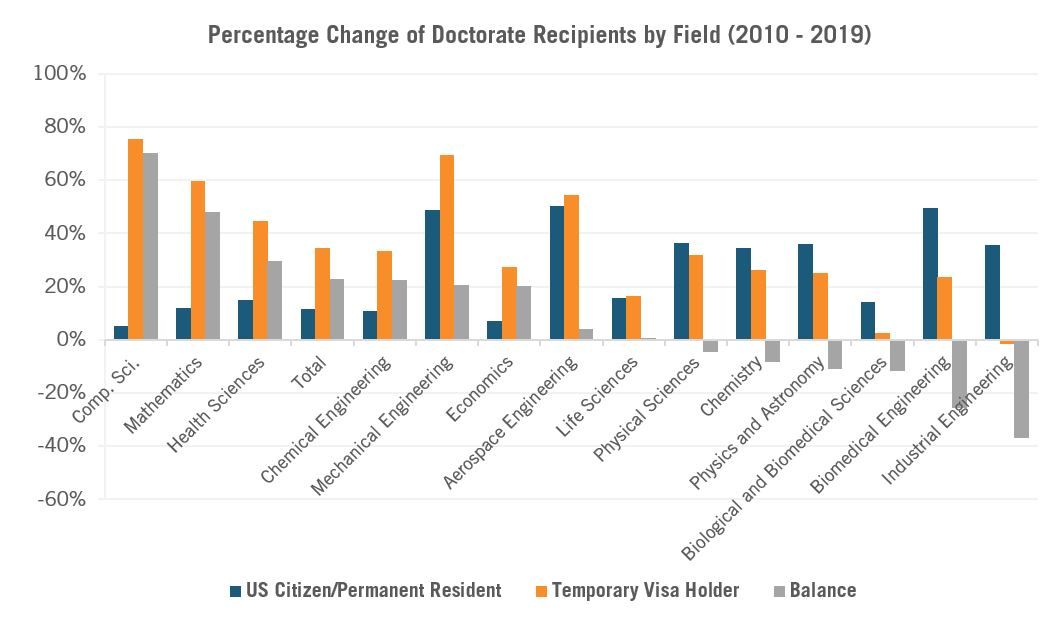 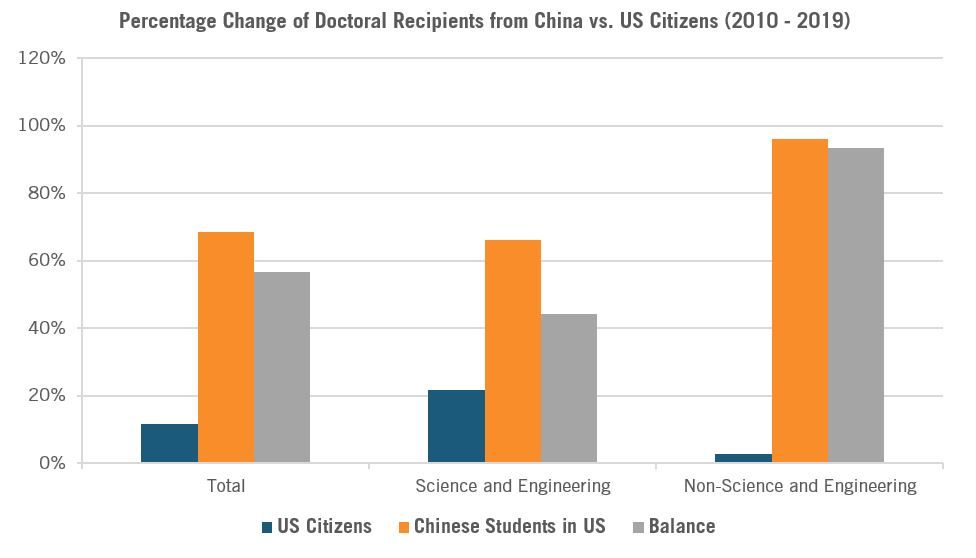 Though the United States generally benefits from foreign students receiving STEM doctorates at American universities, this can also present challenges. Much of this growth can be attributed to Chinese students. Between 2010 and 2019, their doctoral attainment in science and engineering increased by 66 percent, compared to 22 percent for U.S. citizens or permanent residents (see figure 2). In some cases, Chinese students have been sent to serve as commercial spies for the Chinese government. Those students often go on to work for companies in China that compete against the United States.

In general, more foreign students who receive their STEM Ph.D. here go back to their home countries for work, hurting America’s capacity to lead the world in research. In 2008, 17 percent of foreign students getting an American Ph.D. had left the United States within a year. In 2015, that number was 19 percent.

Congress should take this challenge seriously. One place to start would be by expanding federal support for Ph.D. fellowships. Lowering costs paid by students will increase the number of domestic doctoral degree holders. Compared with the number of science and engineering graduates, NSF awards less than half as many research fellowships as it did in the 1960s. Congress should at least double the NSF Graduate Research Fellowship program (currently funded at $285 million), but limit the additional funds only for true STEM degrees, rather than fields like psychology, economics, and sociology, which NSF wrongly defines as STEM. We don’t face a competitiveness challenge with China in sociology.

Fact of the Week: Property Tax Revenue in the Tanzanian City of Arusha has Grown 23 Percent Faster Than Other Local Taxes Since the Introduction of an ICT-based Collection System

Fact of the Week: Equipping Trains With Real-Time Positioning Systems Allows for Dynamic Speed Requirements, Which Reduces the Average Delay by up to 42 Percent