The coronavirus pandemic has highlighted the importance of citizens and businesses having secure and reliable access to online government services. Unfortunately, many Colombian government websites fail to meet basic website standards. This report used publicly available tools to test the page-load speed for both desktop and mobile browsers, mobile-friendliness design, security, and accessibility of 42 Colombian government websites. All websites failed at least one test. Many of the sites are slow, difficult to use on mobile devices, inaccessible, and insecure. As such, they make it unnecessarily difficult to find government information online and expose users to security risks.

Many Colombian government websites also did not perform well on security. This report reviews two security features. The first is Hypertext Transfer Protocol Secure (HTTPS), a standard protocol to encrypt communications between web browsers and websites. The second is Domain Name System Security Extensions (DNSSEC), a set of protocols used to verify the IP address associated with a particular domain name is authentic. We used a tool that analyzes Secure Sockets Layer (SSL) and Transport Layer Security (TLS) certificates, which are used by most HTTPS connections, to test that the websites had enabled and adequately configured HTTPS. We found that 67 percent of Colombian government websites passed the HTTPS test. This result means that users could not privately and securely browse one-third of the sites we tested. In addition, we used a tool to determine whether the domain of each state government website used DNSSEC. We found that less than three percent of Colombian government websites had correctly enabled DNSSEC for their domain name. The only site that passed was the Vice President's website (Vicepresidencia).

Lastly, 48 percent of Colombian government websites passed the accessibility test. Five sites received a perfect score on a 0-to-100-point scale, but five websites also received scores below 60. These latter websites are likely highly inaccessible, meaning they are difficult for people with disabilities to use, including the more than 250,000 Colombians who are blind.

We used the Colombian government websites scores for each test to calculate an overall 0-to-100-point scale score for every site. The Colombian Migration website (Migración; Ministerio de Relaciones Exteriores) performed the best by a wide margin. It received a score of 79.5, which is roughly 15 points better than the next best website. Overall, the five best performing Colombian government websites we tested are:

The five lowest-performing sites are: 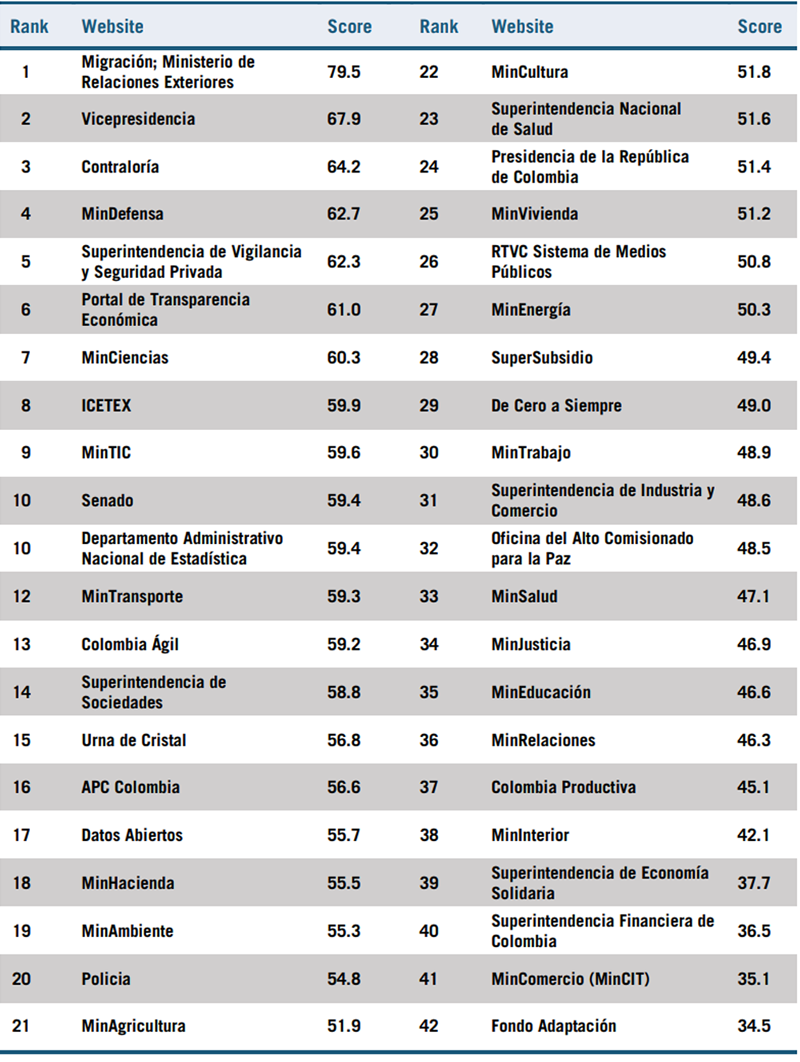 Debating Broadband Speeds in America: What Do the Numbers Say and Why Do They Matter?