The Cities of Tomorrow: How Research and Innovation Can Help Address the U.S. Infrastructure Crises | ITIF
Skip to main content

The Cities of Tomorrow: How Research and Innovation Can Help Address the U.S. Infrastructure Crises

Smart technologies, such as smart metering, real-time transit information, and vehicles with increased autonomy, are rapidly changing how U.S. cities operate. But U.S. metropolitan areas continue to experience mounting problems related to congestion, grid security, and outdated or inadequate roads, bridges, and water supply networks. To tackle these problems, any future investments by the new administration and Congress in America’s aging infrastructure should be focused on “smart infrastructure.” ITIF and Boston University (BU) held a panel discussion on the future of federal policies for smart cities, their opportunities and challenges, and the cutting-edge research and innovation that makes these advances possible.

Smart cities use the Internet of Things, data, and analytics to tackle important urban issues such as how to better manage sanitation systems, improve transportation networks, and deliver government services more efficiently. Azer Bestavros, computer science professor at BU and the founding director of the BU Hariri Institute for Computing, explained that for a city to be “smart,” services must be easily programmable to make city-wide systems “adaptable, personalizable, and nimble.”

Smart infrastructure technologies offer several opportunities, including improved public services, increased accessibility, and cost savings, as well as broad social benefits from new sources of data. For example, smart cities technologies can humanize government by altering the way the public interacts with it, explained Lauren Lockwood, chief digital officer for the City of Boston. City leaders stand at a crossroads and must decide whether to invest in smart infrastructure, explained Daniel Castro, vice president of ITIF. And he cautioned that these decisions could have long-term consequences—much like decisions about railroads and highways affected cities in the past.

The panel discussed several challenges to developing and adopting smart infrastructure. Chief among them is the physical process of merging citywide systems with new technologies due to century-old design and construction, explained Elizabeth Grossman, the director of civic projects in the Technology and Civic Engagement Group at Microsoft. Another challenge discussed was market failures associated with the adoption of the Internet of Things, such as detrimental chicken-and-egg dynamics where the success of Internet of Things applications depends on the success of other technologies. Furthermore, the panel agreed that cities should ensure smart city technologies are not implemented disproportionately, or that they favor certain groups or areas over others. Finally, the panel discussed the importance of privacy and security to the long-term adoption of these technologies.

The panelists agreed that cities can use test cases or “living labs” to effectively test these new systems and networks. This process involves using microcosms, such as local universities, to test the deployment and adoption of smart city technologies. And as cities roll out smart infrastructure, the panel agreed that they should consider the needs of the whole population which they serve from the beginning of the design process. This type of participatory design is invaluable to cities as they explore ways to upgrade their infrastructure.

Open sourcing data and open application program interfaces (APIs) will help ensure the continued functionality of smart infrastructure systems once they are in place and help tackle other challenges that arise, the panel agreed. Bestavros stated that security can be improved by providing open data to the public, while Lockwood pointed out open data can help expose gaps in the public sector’s data collection. Castro explained that public-private partnerships can help fill these gaps by providing the public sector with information gathered from private networks. For example, the fitness tracker Jawbone used data collected from its devices to track how an earthquake affected the sleep of the San Francisco area. In addition, during the panel, Lockwood announced that the City of Boston is about to open source its entire website, in the hope that this type of open collaboration will ultimately better benefit Boston residents.

The panel concluded that government can use the Internet of Things to improve how it operates, and the government can help overcome market failures associated with the Internet of Things by supporting its adoption and deployment. The panelists shared a great sense of optimism about the future of smart cities and the role that they will ultimately play in improving U.S. infrastructure, but they also cautioned against trying to do too much too quickly. Taking a careful, considered approach to smart infrastructure technologies is the best way to ensure that this transition is done thoroughly and effectively. 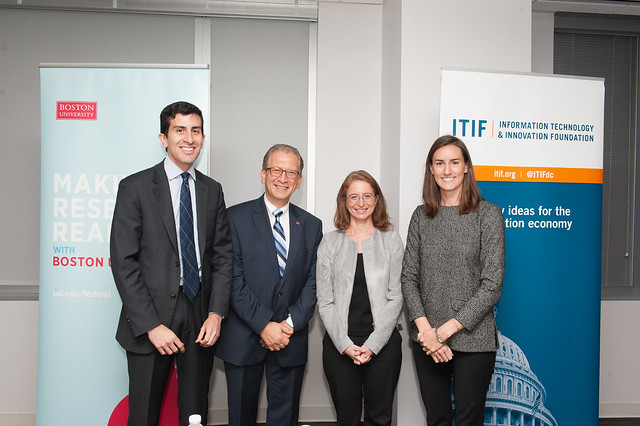 July 22, 2016
State and Local Governments Can Boost Productivity with Strategic IT Investments
November 12, 2015
Smart Cities Vital to Sustain Asia's Growing Urban Population
February 8, 2012
Innovation in Cities and Innovation by Cities
Get weekly updates from the think tank at the forefront of tech policy.
1