What’s Past Is Prologue: Microsoft’s Acquisition of Activision Blizzard Does Not Raise Foreclosure Concerns

“What’s past is prologue.” This line from Shakespeare’s The Tempest is an apt metaphor for how we should think about Microsoft’s proposed acquisition of Activision Blizzard (Activision). Unfortunately, in its phase one review of the acquisition, the United Kingdom’s Competition and Markets Authority (CMA) was so focused on the future that it ignored what could be learned from the past. Microsoft’s past acquisition conduct demonstrates that the CMA’s concerns about vertical foreclosure are not well-founded.

On January 18, Microsoft announced its plan to acquire Activision for $68.7 billion. Activision is a developer and publisher of many popular video game titles for gaming consoles, PCs, and mobile devices. Its most popular title for consoles and PCs is Call of Duty. In 2021, the game had 150 million monthly active users (MAUs), and several releases in the Call of Duty franchise are among the top 20 most popular video games in 2022. While Microsoft also develops and publishes video games, the CMA has not raised any horizontal concerns about the merger—presumably because it recognized that video game publishing is highly competitive.

The CMA’s concern largely derives from Microsoft’s role as a producer of gaming consoles. Microsoft’s Xbox console competes with the Sony PlayStation and, to a lesser extent, with the Nintendo Switch. Sony is the market leader with nearly two-thirds of console sales worldwide while Microsoft has around a third of worldwide sales. The CMA raised a number of vertical concerns with the merger, one of which is that Microsoft might deny Sony access to Call of Duty post-merger.

A vertical foreclosure strategy is generally only profitable if the gain in sales made through the vertical firm’s own downstream unit are larger than the lost sales from foreclosing the downstream competitor. That is, Microsoft would only deny Sony access to Call of Duty if the increase in Xbox sales outweighed the lost Call of Duty sales. Certainly, some Sony console customers would purchase an Xbox in order to be able to access Call of Duty, however, some Sony customers would rather give up Call of Duty than switch to the Xbox. The vertical math depends on a number of factors including the popularity of Call of Duty, Sony’s share of console sales, and how different Microsoft’s and Sony’s consoles are from one another. If Call of Duty sales are high and Sony’s customers represent a large portion of those sales, then the cost of vertical foreclosure will be higher. If gaming consoles are very similar and there is no real difference between accessing Call of Duty on an Xbox versus accessing it on a PlayStation, then the gains to vertical foreclosure will be greater.

It is clear from the phase one decision, that the CMA did not find either Microsoft’s or Sony’s evidence on the vertical math to be persuasive. Given the complexity of this analysis, there likely are valid criticisms to be made. Instead, the CMA primarily relies on other evidence to conclude that Microsoft has both the ability and incentive to foreclose Sony post-merger. But the CMA either largely overlooks or draws incorrect conclusions about the evidence on Microsoft’s past acquisition conduct.

In 2014, Microsoft acquired Mojang, the studio responsible for developing Minecraft, which is Microsoft’s most popular video game title. In 2021, Minecraft had over 140 million MAUs and it “is the best-selling and most popular video game of all time.” At the time of Microsoft’s proposed acquisition, Minecraft only had around a quarter of the MAUs that it has today. But Minecraft was growing rapidly. To get a sense of Minecraft’s growth rate, figure 1 shows how many years Minecraft and Call of Duty took to achieve certain MAU benchmarks. For example, while Call of Duty only had 40 million MAUs eight years after its launch, Minecraft had the same number of MAUs no more than five years after launching. Similarly, Call of Duty only had 70 million MAUs 15 years after launching, whereas Minecraft achieved this number of MAUs in less than half that time. Even though Minecraft had fewer MAUs at the time of the acquisition than Call of Duty has today, these were both very popular games at the time of their proposed acquisitions.

Figure 1: Growth rate in the number of monthly active users (MAUs) for Call of Duty and Minecraft 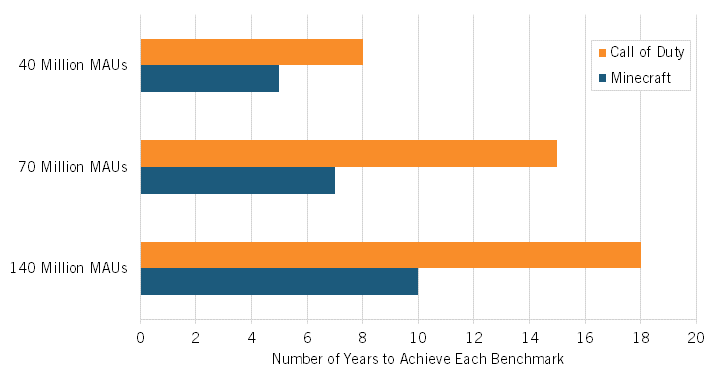 When it announced its acquisition of Mojang, Microsoft committed to continue to make Minecraft available on all competing devices including the Sony PlayStation. To date, Microsoft has honored that commitment. That Microsoft did not foreclose Sony is not surprising considering the popularity of Minecraft and Sony’s large share of console sales. Microsoft correctly determined that the cost of foreclosure would exceed the benefits. We should not expect the calculus to be any different with respect to Call of Duty where Microsoft has committed to continue to make Call of Duty available to Sony.

This is the exact opposite conclusion that we should draw from Microsoft’s conduct. When a game title is not very valuable, the cost to making that title exclusive to the Xbox is relatively low. That is, Microsoft does not lose very many customers accessing that title on Sony’s console because there are not very many customers to begin with. For a popular game franchise like Call of Duty, the cost of making those titles exclusive is much higher suggesting a weaker incentive to make the content exclusive post-merger.

The CMA has erred in its analysis of Microsoft’s incentives to foreclose Sony post-merger. Microsoft’s past acquisition conduct demonstrates that Call of Duty is likely to remain available on PlayStation and other devices. The CMA can, and should, change course during its phase two investigation and clear this competitively benign acquisition.

Comments to the Justice Department and FTC Regarding Merger Enforcement