Antitrust Populists Don’t Seem to Care About the Poor

(Editor’s Note: The following commentary is cross posted from Truth on the Market, where it appears as part of a digital symposium on Antitrust’s Uncertain Future: Visions of Competition in the New Regulatory Landscape.)

When I was a kid, I trailed behind my mother in the grocery store with a notepad and a pencil adding up the cost of each item she added to our cart. This was partly my mother’s attempt to keep my math skills sharp, but it was also a necessity. As a low-income family, there was no slack in the budget for superfluous spending. The Hostess cupcakes I longed for were a luxury item that only appeared in our cart if there was an unexpected windfall. If the antitrust populists who castigate all forms of market power succeed in their crusade to radically deconcentrate the economy, life will be much harder for low-income families like the one I grew up in.

Antitrust populists like Biden White House official Tim Wu and author Matt Stoller decry the political influence of large firms. But instead of advocating for policies that tackle this political influence directly, they seek reforms to antitrust enforcement that aim to limit the economic advantages of these firms, believing that will translate into political enfeeblement. The economic advantages arising from scale benefit consumers, particularly low-income consumers, often at the expense of smaller economic rivals. But because the protection of small businesses is so paramount to their worldview, antitrust populists blithely ignore the harm they would cause low-income families by advancing their objectives.

This desire to protect small businesses without acknowledging the economic consequences for low-income families is plainly obvious in calls for reinvigorated Robinson-Patman Act enforcement (a law from the 1930s for which independent businesses advocated to limit the rise of chain stores) and in plans to revise the Horizontal Merger Guidelines. The Justice Department and the Federal Trade Commission recently held a series of listening sessions to demonstrate the need for new guidelines. During the listening session on food and agriculture, independent grocer Anthony Pena described the difficulty he has competing with larger competitors like Walmart. He stated that,

Just months ago, I was buying a 59-ounce orange juice just north of $4 a unit, where we couldn't get the supplier to sell it to us… Meanwhile, I go to the bigger box like a Walmart or a club store. Not only do they have it fully stocked, but they have it about half the price that I would buy it for at cost.

Half the price. Anthony Pena is complaining that competitors such as Walmart are selling the same product at half the price. To protect independent grocers like Anthony Pena, antitrust populists would have consumers, including low-income families, pay twice as much for groceries.

In 2019, the U.S. Department of Agriculture launched the SNAP Online Purchasing Pilot which allows SNAP recipients to use their benefits at online food retailers. The pandemic led to an explosion in the number of SNAP recipients using their benefits online—increasing from just 35,000 households in March 2020 to nearly 770,000 households just three months later. While the pilot originally only included Walmart and Amazon, the number of eligible retailers has expanded rapidly. In order to make grocery delivery more accessible to low-income families, an important service during the pandemic, Amazon reduced its Prime membership fee (which helps pay for free delivery) by 50 percent for SNAP recipients.

The antitrust populists are not only targeting the advantages of large brick and mortar retailers, such as Walmart, but also of large online retailers like Amazon. Again, these advantages largely flow to consumers—particularly low-income ones.

The proposed American Innovation and Choice Online Act (AICOA), which was voted out of the Senate Judiciary Committee in February and may make an appearance on the Senate floor this summer, threatens those consumer benefits. The AICOA would prohibit so-called self-preferencing by Amazon and other large technology platforms.

Should a ban on self-preferencing come to fruition, Amazon would not be able to prominently show its own products in any capacity—even when its products are a good match for a consumer’s search. In search results, Amazon will not be able to promote its private label products, including Amazon Basics and 365 by Whole Foods, or products for which it is a first-party seller (i.e., a reseller of another company’s product). Amazon may also have to downgrade the ranking of popular products it sells, making them harder for consumers to find. Forcing Amazon to present offers that do not correspond to products consumers want to buy or are not a good value inflicts harm on all consumers but is particularly problematic for low-income consumers. All else equal, most consumers, especially low-income ones, obviously prefer cheaper products. It is important not to take that choice away from them.

Consider the case of orange juice, the product causing so much consternation for Mr. Pena. In a recent search on Amazon for a 59-ounce orange juice, as seen in the image below, the first four “organic” search results are SNAP-eligible, first-party or private-label products sold by Amazon and ranging in price from $3.55 to $3.79. The next two results are from third-party sellers offering two 59-ounce bottles of orange juice at $38.99 and $84.54—more than five times the unit price offered by Amazon. By prohibiting self-preferencing, Amazon would be forced to promote products to consumers that are significantly more expensive and that are not SNAP-eligible. This increases costs directly for consumers who purchase more expensive products when cheaper alternatives are available but not presented. But it also increases costs indirectly by forcing consumers to search longer for better prices and SNAP-eligible products or by discouraging them from considering timesaving, online shopping altogether. Low-income families are least able to afford these increased costs. 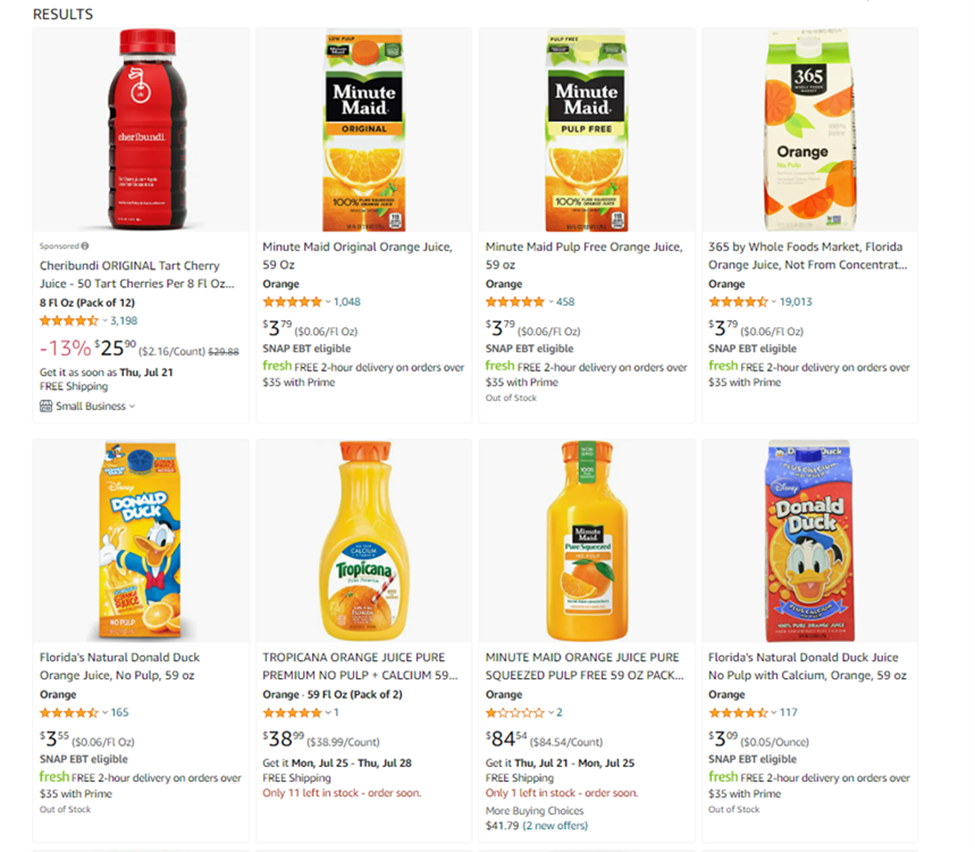 The upshot is that antitrust populists are choosing to support often well-off small business owners at the expense of vulnerable working people. Congress should not allow them to put the squeeze on low-income families. These families are already suffering due to record-high inflation—particularly for items that constitute the largest share of their expenditures, such as transportation and food. Proposed antitrust reforms such as reinvigorated Robinson-Patman Act enforcement and the AICOA will only make it harder for low-income families to make ends meet.

Biden Antitrust: The Paradox of the New Antitrust Populism

“Please, Help Yourself”: Toward a Taxonomy of Self-Preferencing