If Congress Wants to Help American Workers, It Should Not Require Two-Person Train Crews

This week the House Transportation Committee, Subcommittee on Railroads, Pipelines, and Hazardous Materials is holding a hearing, “Examining Freight Rail Safety.” A core issue it will examine is freight rail crew sizes. As technology such as Positive Train Control systems has improved, and further advances in autonomous systems look promising, freight rail companies would like the flexibility of operating trains with less than two operators, not so they can raise profits, but so they can reduce prices to better compete with the trucking sector.

In contrast, the railway workers’ unions and their supporters argue that such a move would reduce safety. This is a key issue for the unions. They have launched a campaign with material (lawn signs, t-shirts, and bumper stickers) that says “Unite and Fight For Two-Person Train Crews” “all designed to raise awareness of the issue and build the fight-back by rank and file workers.” For the unions, this makes perfect sense: their members pay their dues in part to have their jobs protected.

But that doesn’t mean their interests align with the public interest. The rail workers’ efforts are fundamentally about protecting rail workers at the expense of all other workers. If rail workers limit automation, rail costs will go down more slowly, which means that all other workers in America will not see the savings in terms of reduced costs for goods shipped by rail.

This, unfortunately, is a classic case of what noted political scientist Mancur Olson termed “the logic of collective action.” All too often legislative or regulatory changes that help one small group while hurting the rest of society pass because the former group is highly motivated to fight for the issue, while the rest of the public is not. That’s what’s happening with the case of mandatory train size. Rail unions fight against it; the consuming public is unaware of the issue.

ITIF and others have written about why the evidence suggests that freight rail companies can reduce crew size without harming safety. But what has been less not focused on is productivity. U.S. labor productivity growth is the single most important economic variable affecting America’s future, far more important than cyclical indicators of jobs and inflation. The reason is simple: higher labor productivity means increased output which means increased incomes. It’s as simple as that.

According to the U.S. Bureau of Labor Statistics, from 1988 to 2020, rail productivity (passenger and freight) more than tripled. The industry produced 213 percent more output per worker in 2020 than it could 32 years prior. Compare that to the overall U.S. business economy, which increased just 90 percent. (See figure 1.) If the overall economy increased its productivity at the same rate as the rail industry, U.S. GDP today would be $11.7 trillion more per year. And assuming no change in tax rates, federal tax revenues would be at minimum $1.9 trillion higher in 2020, almost double the level of the federal budget deficit in 2019 before the COVID crisis. In other words, boosting productivity is critical. 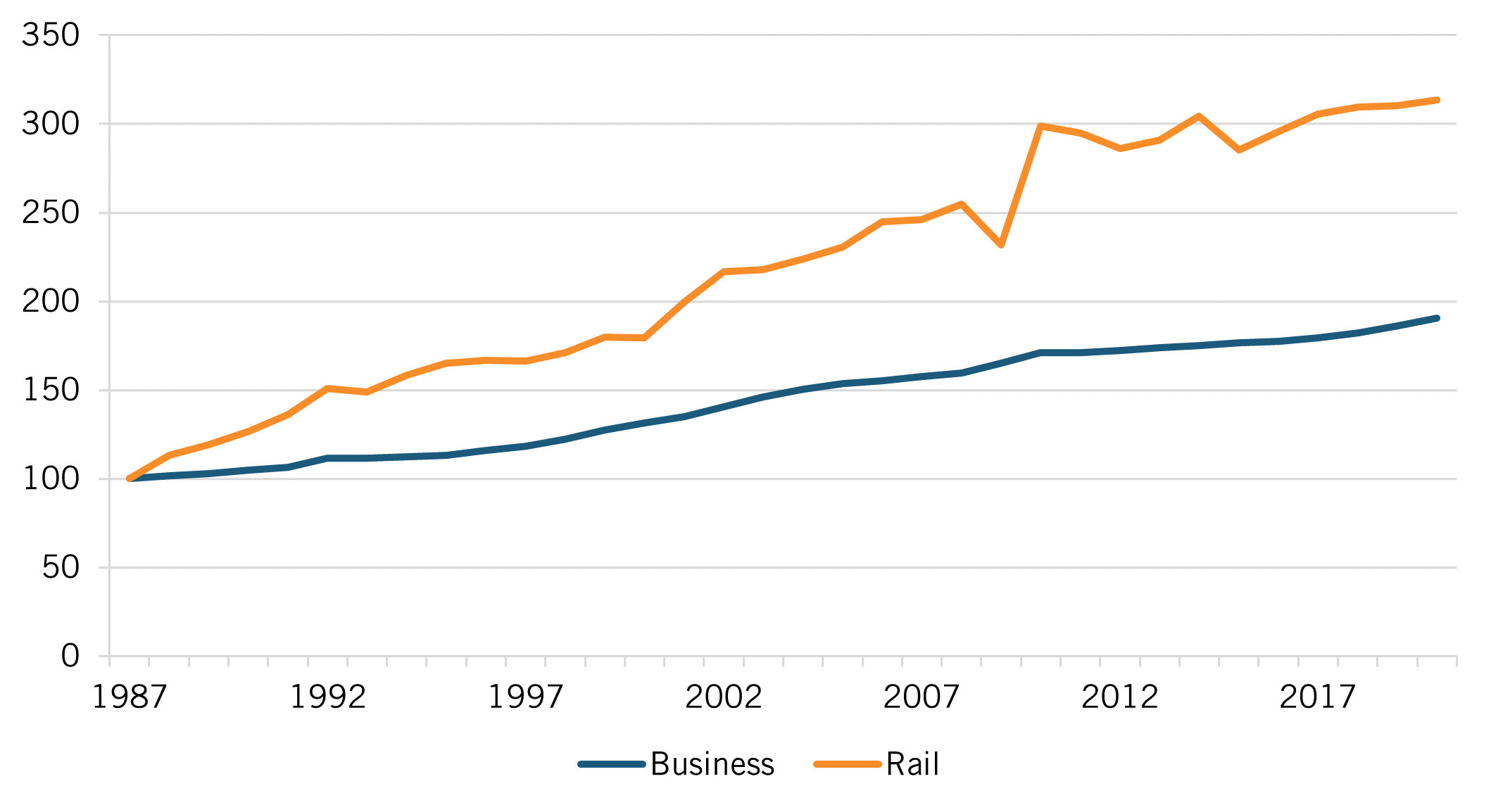 The rail sector has been able to achieve such stellar productivity growth in part through the application of a wide array of technologies. That is why it is so troubling that the Biden administration and Congress are considering passing rules to throw a wrench into this progress. Mandating crew sizes, as well as limiting other train technologies such as automated track and train inspection technology, will help move the growth of the rail productivity line down to the growth of the business productivity line.

Rather than dragging down a leading industry through restrictive, union-focused labor protection rules, Congress and the administration should be doing the opposite and trying to bring the rest of the economy up closer to the performance of the rail sector.

But what about jobs, the last refuge of the labor protectionist? The reality is that there is simply no overall negative relationship between productivity, unemployment, and jobs. If there was, how can opponents of automation reconcile the fact that while overall business productivity increased by 90 percent in the last 25 years, jobs increased by one-third, and the unemployment rate fell by 37 percent? Productivity doesn’t reduce jobs because it boosts worker incomes, letting them spend more and, in the process, creating additional jobs.

So, if Congress and the Biden administration want to rightly pursue their middle-class worker agenda and fight inflation, the last thing they should do is ensconce into law and regulation limits on rail innovation.

Freight Rail Wants Smarter, Greener And Safer Shipping. Its Regulators Have Other Ideas.