In late 2021, the Biden administration published a strategy detailing the pathways to net-zero greenhouse gas (GHG) emissions by 2050. The goal is ambitious but not rooted in reality based on current federal policies and technology. In the Annual Energy Outlook 2022, the Energy Information Administration forecasts that if current policy and technology trends continue, U.S. energy-related emissions would decline only 2 percent from 2021 to 2050. The message is clear: To leap from a 2 percent decline to a 100 percent decline in GHG emissions, the United States must continue to encourage and support continued innovation in energy.

Although energy RD&D investments have been gradually increasing in the past 15 years, they are far below the levels observed from 1977 to 1981. Yet such heightened levels were only reached several years after the onset of the first energy crisis in 1973 and the creation of the Department of Energy (DOE) in 1977. Congress was slow to react. As a new energy crisis unfolds in 2022, the United States should be more proactive. The looming threat of climate change adds to the urgency with which Congress should act to pivot away from reliance on unabated fossil fuels.

The administration’s proposed FY 2023 budget for energy RD&D, along with the appropriations from the bipartisan Infrastructure Investment and Jobs Act of 2021, will put the nation on the right path. Yet, the United States still has ways to go. In particular, the buildings sector, bioenergy, and geothermal energy are not receiving the level of investment they need for the U.S. economy to be fully decarbonized by 2050 compared to the recommended levels in Energizing America—a book-length collaboration between ITIF and Columbia University’s Center on Global Energy Policy that details a roadmap to launch a national energy innovation mission. 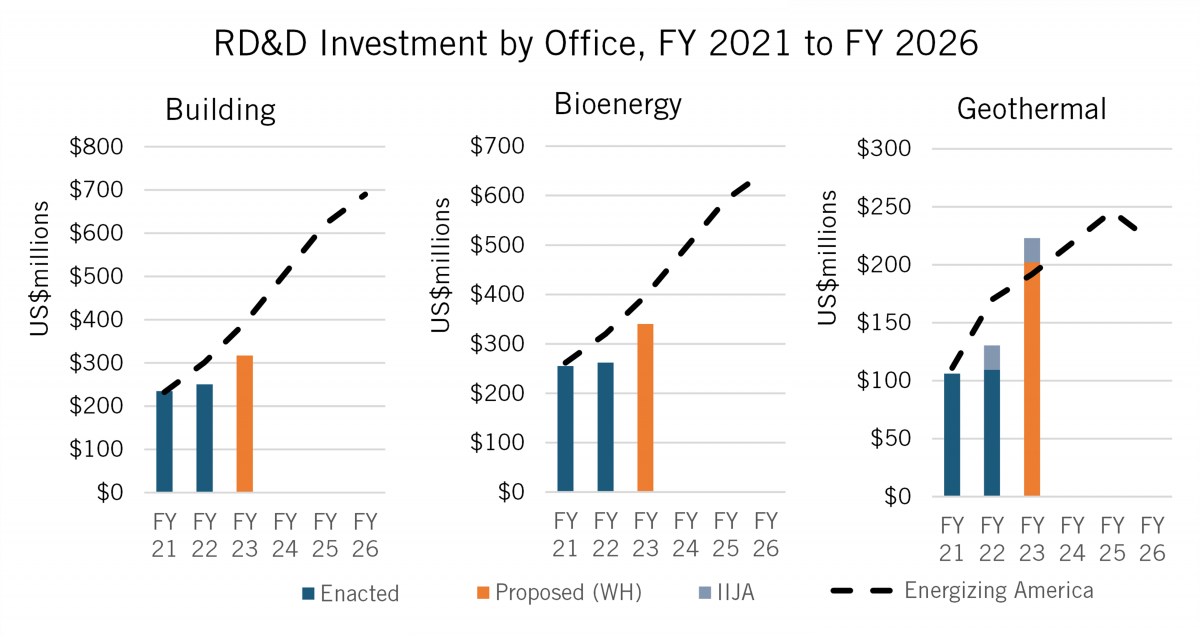 GHG emissions from the buildings sector rose 12 percent between 2005 and 2019 while other sectors (industrial, transportation, and electricity generation) recorded modest to significant emission reductions. Hydrofluorocarbons(HFCs) from refrigerants, which have a very high global warming potential (GWP), are the main drivers of the increase. Moreover, climate change will drive an increase in summer air conditioning use, which will further increase emissions from refrigerants. Although the buildings sector contributes about 13 percent of U.S. emissions, DOE’s Building Technologies Office (BTO) has usually received less than 5 percent of the Department’s RD&D funding. Unfortunately, the President’s budget for BTO in FY 2023 is notably below Energizing America’s recommended level. BTO has identified refrigerants with low-GWPs as one of its main RD&D goals, and the Senate Foreign Relations Committee had recently unanimously approved the Kigali Amendment (an international agreement to gradually reduce the consumption and production of HFCs) to the Montreal Protocol, which phased out ozone-depleting substances but led to a shift toward HFCs. Now is the time for the Biden administration to show its full support for this key office.

Bioenergy could be vital to lower emissions from hard-to-abate sectors such as aviation and industry. Biomass feedstock and algal system technologies also have the potential to enable sustainable bioenergy carbon capture and sequestration, which would reduce emissions from agriculture, which have also risen since 2005. Like BTO, DOE’s Bioenergy Technologies Office receives less than 5 percent of DOE’s RD&D funding. The President’s budget for BETO in FY 2023 is also below the recommended level.

Geothermal energy is a third area that deserves a larger place in the portfolio. Unlike solar and wind power, which are intermittent in nature, and hydroelectric power, which is weather dependent, geothermal power has no such restrictions. However, its present deployment is geographically limited. Enhanced geothermal systems have the potential to overcome such limits and unlock enormous amounts of energy. These systems are still in the early demonstration stage, far away from being market-ready, and would benefit from an infusion of public funds. Yet DOE’s Geothermal Technologies Office has consistently received less funding than offices supporting other renewable technologies. Unlike BTO and BETO, the President’s budget for GTO in FY 2023 slightly exceeds the recommended level.