The emergence of COVID-19, and its dramatic economic impacts, have increased policymakers' need for more frequent and detailed economic and trade data and analysis. The ability of statistical agencies to collect and analyze data in near real time and on a disaggregated basis (by specific geography or sector or product) is a major challenge facing every country, but it’s especially critical during times of crisis. The use of electronic data is even more important during a pandemic when agencies suspend face-to-face surveys and the in-store collection of prices, both of which form the basis for key economic indicators. At a time when statistics are most needed, many statistical systems around the world are struggling to compile basic statistics.

Brazil’s innovative use of electronic invoices (EIs) to provide granular, monthly analysis of domestic economic and foreign trade activity provides a case study for how countries need to put in place the legal and administrative framework, plus the skills, to allow this type of data sharing and analysis. However, analysis of EIs to show domestic production and imports of critical COVID-19 products, and as part of negotiations at the World Trade Organization, show the value of building this data collection and analysis capability. Brazil’s case is instructive for the many countries and organizations (such as the Organization for Economic Cooperation and Development (OECD)) looking at the issue of how to encourage data sharing among and between public agencies and private firms and organizations.

Case: Analysis of Electronic Invoices Puts Brazil on the Cutting Edge of Trade and Economic Analysis

Brazil is a leading example of how to use electronic data for better public policymaking. Brazil’s analysis of electronic invoices (known in Brazil as NF-e) provides an almost census-level picture of economic and trade transactions in the country.

EIs are machine-readable invoices issued, received, and processed electronically between buyers’ and suppliers’ finance and tax systems. It’s mandatory for all individuals and firms in Brazil to use e-invoices for tax purposes. As ITIF’s report “Why Countries Should Build an Interoperable Electronic Invoicing System Into WTO E-Commerce Negotiations,” details, EIs are increasingly common around the world as they are a win-win: they shorten payment processing times and cut transaction costs for businesses, and they help governments fight tax fraud, among other benefits.

EIs are a global phenomenon. A 2018 EY survey showed that of 82 countries, 57 had EI regulations (see below). However, every country’s tax system is different and not every country makes EIs mandatory. For example, In the United States, the private sector has largely driven the use of EIs—there are over 200 EI network operators. While there’s no national EI system, the United States mandates that all government procurement contracts use EIs. Also, not every EI system will include trade classifications. But either way, analysis of EIs and other public records still holds enormous promise. This potential use should be factored into legal and regulatory reforms around public services and data. 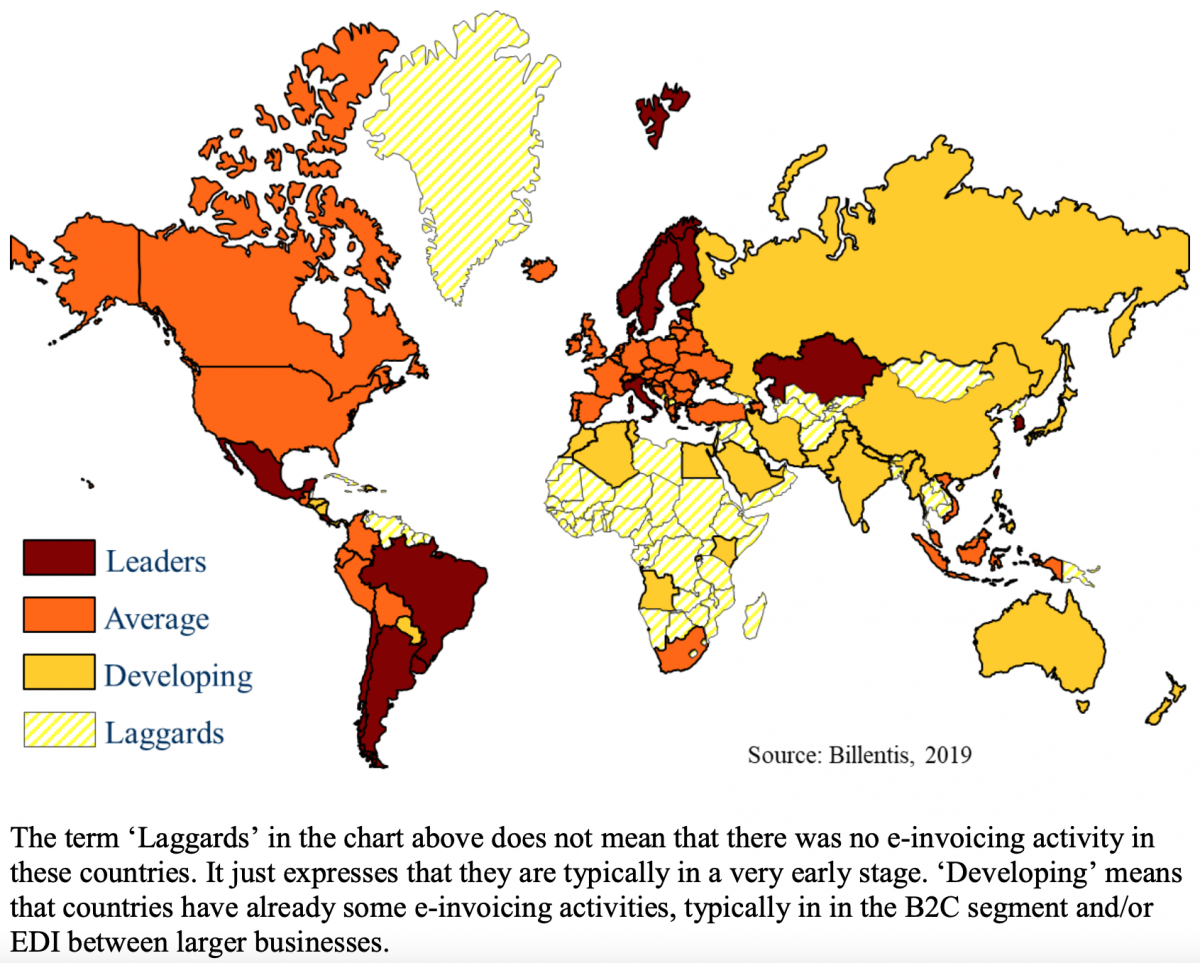 Brazil uses EIs to analyze granular, monthly changes in the flow of goods in and out of the country. Brazil can analyze trade in specific products as every EI includes a field that specifies the product code as based on the Mercosur Common Nomenclature (known in Spanish as the nomenclatura Común del Mercosur, NCM), a regionsal product classification system, which has around 10,300 codes. The NCM is based off the Harmonized System (HS) codes used for global trade, which means Brazil can analyze EIs for both domestic and trade activity (given many countries face challenges reconciling domestic economic and foreign trade statistics). The EIs also include information fields that allow Brazil to analyze changes by organization and sector. The monthly reporting of EIs for tax purposes means that Brazil can analyze changes constantly. In contrast, traditional statistics on imports and exports are often incomplete and very slow. For example, reporting export statistics typically takes 114 days in Africa, 96 in the Asia-Pacific, and 64 in the Western Hemisphere.

Brazil conducted two studies to prove the value of granular and constant analysis of EIs. The first study used EIs to calculate national consumption, the import penetration coefficient, and the export coefficient for each NCM product line. Brazil was able to use this analytical model to see exactly how much health equipment and supplies were being produced, imported, and exported. In a second study (English version) in 2021, Brazilian officials analyzed EIs to understand the implications of joining the World Trade Organization’s (WTO) Government Procurement Agreement (it started accession negotiations in 2021). The analysis showed the disaggregated statistics on Brazil’s government purchases at the national, state, and city levels of goods (both value and quantity), by trade classifications (NCM product line).

The value of this detailed analysis of EIs are many and varied. From a domestic procurement perspective, it provides oversight and accountability about public spending by federal, state, and city government agencies. From an economic management perspective, it provides direct and disaggregated analysis of domestic economic and foreign trade activity in specific sectors and products. For trade negotiators, it provides specific and detailed knowledge about what products a trading partner exports to them and vice versa.

This capability did not happen by accident. Cooperation between Brazil’s trade and tax agencies was central to its success in using e-invoices. In 2018, Brazil’s Ministry of Industry, Foreign Trade and Service (MIDC) signed a formal agreement with Brazil’s federal tax agency (who collect and analyze the e-invoices) to provide access to the data at an aggregate level (in order to preserve the confidentiality of organizations using EIs). As part of this, Brazil’s trade ministry setup a dedicated data analytics team to use the data. It shows that it takes forethought and cooperation between government agencies to get the most out of new electronic products and government services.

Brazil’s case highlights how there can be organizational, technical, and legal challenges preventing public and private organizations sharing data. A major challenge is that while a business-to-government data transfer may be in the public interest, it may not lead to benefits to the firm. In fact, it can lead to legal and reputational risks from disclosing data, whether due to the confidential nature of the data, user privacy, or potential misuse of the data by a third party.

Governments need to ensure that they have the legal and regulatory framework in place to account for legitimate concerns that the private sector and government agencies have in sharing data for the public good. The United States and other countries are focusing more attention on how to facilitate data sharing with and between the public and private sectors. For example, Australia’s data-sharing and release legislation and Estonia’s Information Sharing Data Sheet (X-Road) initiative. Likewise, the European Commission has plans to draft a “Data Act” to foster business-to-government data sharing.

Some global norms and best practices are emerging. For example, in October 2021, Organization for Economic Cooperation and Development (OECD) members adopted its Recommendation on Enhancing Access to and Sharing of Data (EASD), which is the first internationally agreed-upon set of principles and policy guidance on how governments can maximize the cross-sectoral benefits of all types of data—personal, non-personal, open, proprietary, public and private—while protecting the rights of individuals and organizations. It aims to reinforce trust across the data ecosystem (in terms of all the stakeholders), stimulate investment in data collection and use, incentivize data access and sharing, and foster effective and responsible data access, sharing, and use across sectors and jurisdictions. This is an enormously important issue as there is a lot of potential value locked up by data privacy and protection frameworks and other laws that directly or inadvertently prevent reasonable, responsible, and ethical sharing of data, whether this is for statistical analysis and public policy making or commercial innovation and services.

How Barriers to Cross-Border Data Flows Are Spreading Globally, What They Cost, and How to Address Them