Continued Innovation in Renewable Energy Is Not a Given: Public Policy Must Push and Pull

The pointless, long-running debate about whether the energy transition should prioritize either innovation or deployment is over. The world needs both. It remains to be seen, however, whether all those focused on decarbonization appreciate the continuing need for comprehensive innovation policies that will reduce the costs and improve the performance of a broad portfolio of low-carbon technologies. Such policies should encompass both demand and supply-side approaches. Deployment fueled by incentives, regulation, and other demand-shaping policies drives private-sector innovation, even as publicly-funded RD&D creates new options for the market to explore and solves nagging problems from the supply-side.

Many climate advocates point to models that, they claim, assert that renewable resources are already cheaper than conventional energy sources. They draw the conclusion that the main task of climate policy is to aggressively deploy these already-affordable technologies. The problem is that this misreads the models. What the models actually say is that continued steady cost declines will make unsubsidized wind, utility-scale solar, and batteries cheaper than dirty energy at some point in the future. Future cost declines are baked into the models, but the forces that drive these declines are not made explicit.

Technology theorists note that innovation is not manna from heaven. While costs may continue to decline as a result of market forces alone, they very well might not. The cost declines assumed in the models are not necessarily impossible, exaggerated, or somehow deceptive, but policymakers, entrepreneurs, and scholars must avoid the trap of thinking that they are an absolute certainty. We need to unpack the hidden assumptions that enable them—especially assumptions about continued policy support—and take steps to guard against contingencies that could derail the expected progress.

Claims that the United States can decarbonize its grid at no additional cost, or even achieve net savings in the process, will only come true if comprehensive climate-tech innovation policies are in place.

In November 2021, as the Biden administration was gearing up for COP26 in Glasgow, it published a white paper setting forth how the United States could cut emissions by investing in renewables, along with other measures. The paper asserted that the strategy would result in a net economic benefit between now and 2050. It cited eleven studies from energy think-tanks, environmental organizations, and universities in support of this conclusion. But what the administration did not say, nor did the cited studies make clear, is that the conclusion of net economic benefit is contingent on continued steady declines in renewable energy costs.

We were curious about the assumptions embedded in these studies, so we dug deeper into their models. All eleven studies rely on a single set of cost projections that is updated annually, the National Renewable Energy Laboratory’s (NREL) Annual Technology Baseline (ATB). These projections are fed into varying energy models to predict future overall renewable energy deployment and total system-wide transition costs. Notably, to achieve ambitious climate targets with a net benefit to the economy, continued declines far beyond today’s already low costs will be necessary. 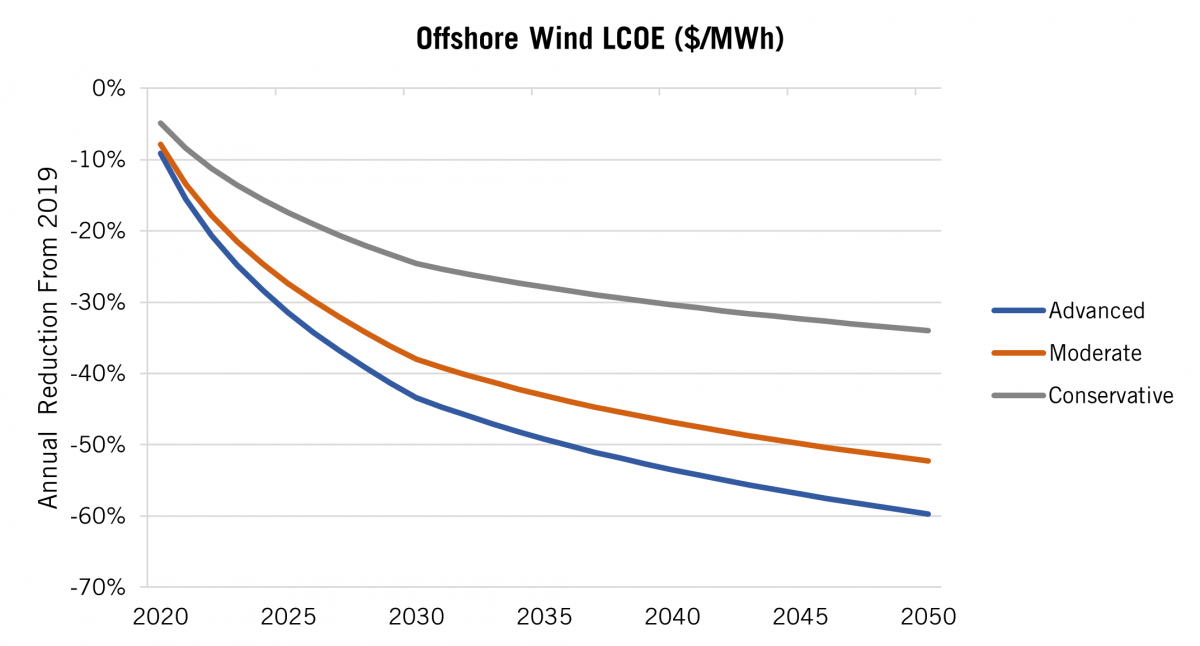 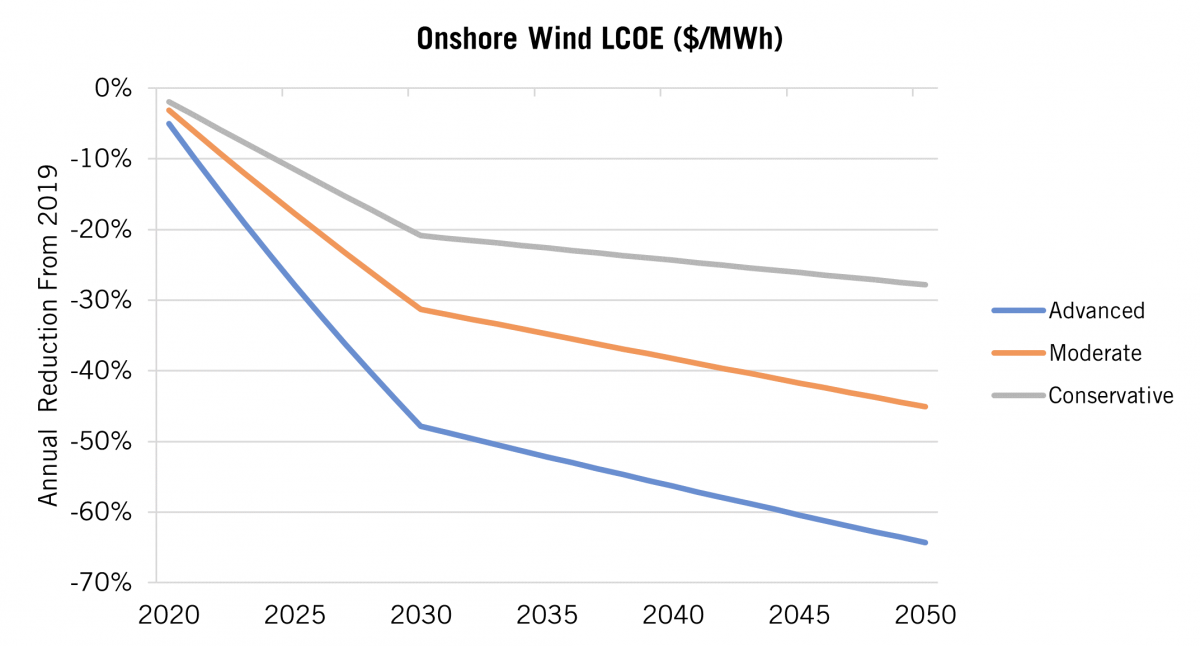 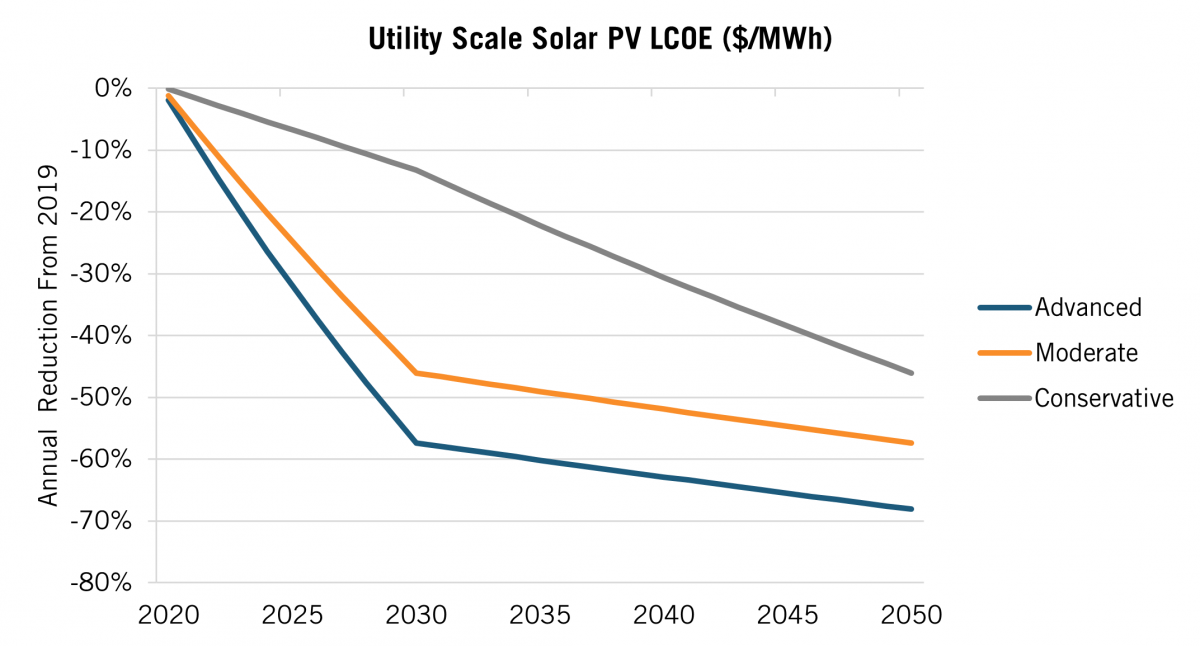 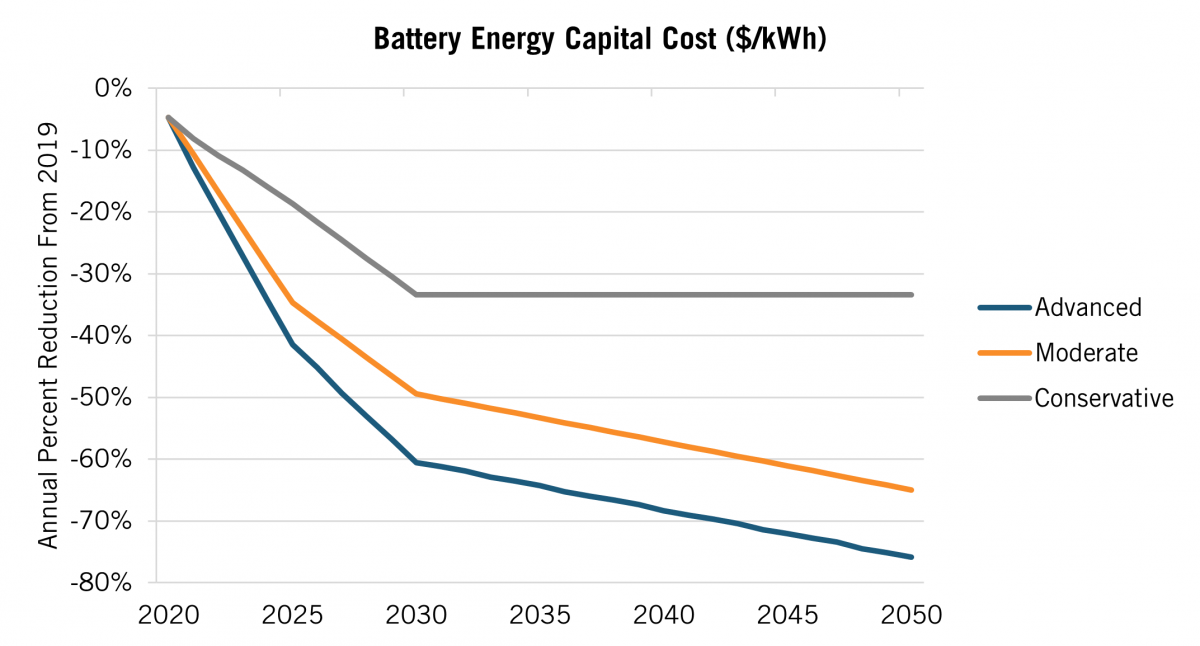 For instance, the projections for offshore wind through 2030 implies cost reduction between 25 to 43 percent. With its higher capacity factors and fewer land-use constraints than traditional onshore wind, offshore wind is seen as vital to high-renewables grid. Similarly, utility-scale battery storage, which will dramatically expand renewables deployment, is expected to decline in cost by between 33 to 60 percent by 2030. If the energy transition models relied on today’s costs rather than these projected decline, the system transition would be very costly, rather than providing a net benefit.

What might upend these projections? To be sure, cost declines are likely as more units are deployed, driving innovation in design, deployment, and management. However, scale and learning effects eventually exhaust themselves, and history suggests they may do so unexpectedly. The current uptick in renewable costs should serve as a wake-up call, even if it proves to be transitory. The International Energy Agency, for example, notes that total investment cost for utility-scale wind and solar projects could increase by as much as 25 percent over the next few years before global commodity inflationary pressures subsides. Continued investment in hardware, software, and soft cost innovation is crucial to achieving a low-carbon future.

Beyond the Black Box

Economists and modelers have long treated innovation as a black box, something that just occurs as technologies developed, scaled, and deployed. But the black box approach is too simplistic, given the stakes for the climate of sustaining innovation to create better, cheaper solutions to achieve a zero-carbon electricity grid by 2035 and economy-wide deep decarbonization by 2050.

DOE’s 2021 Solar Futures Study is an example of a study that opens up the black box of climate-tech innovation. The study lays out two innovation pathways that both achieve a 57 percent cost reduction by 2030. Following either pathway would spur vast investment and deployment of solar power, with a cumulative range of 760 GW to 1,000 GW by 2035. 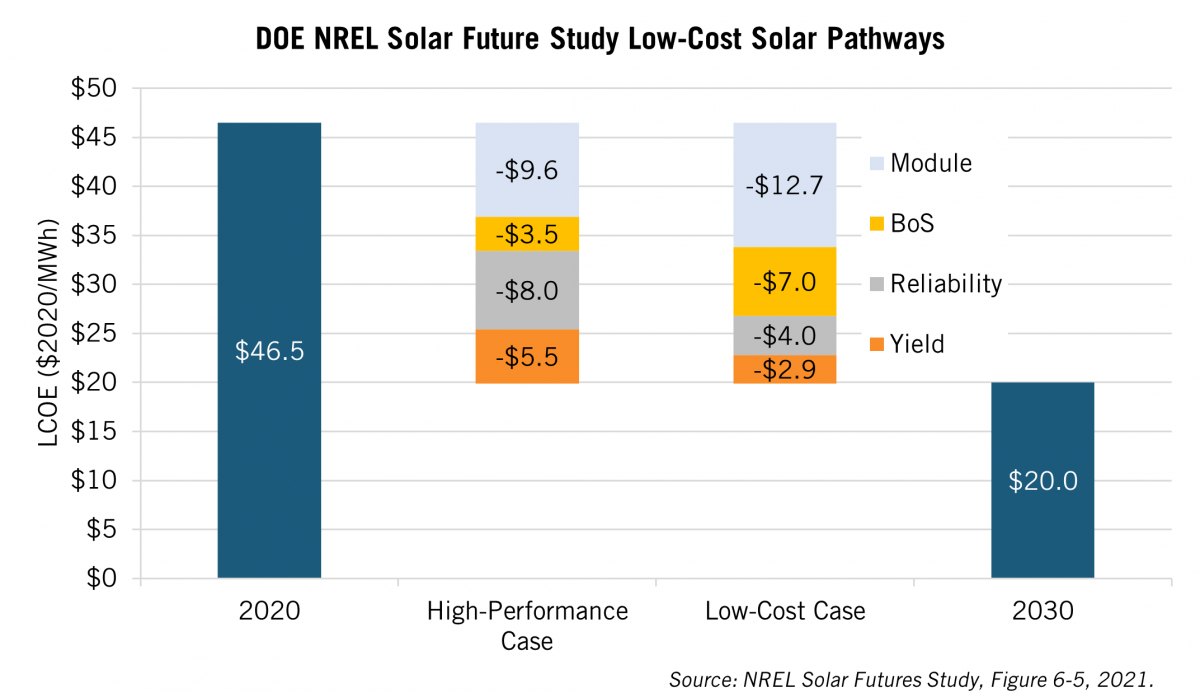 One pathway (“low-cost”) relies primarily on demand-side drivers to cut the costs of solar PV modules and balance of system (BoS) components through mass production. Key policies that would enable the United States to follow this pathway could include innovations in financing like those that made third-party ownership models commonplace. These models lowered the up-front cost of installation and brought solar to previously-uninterested states like Georgia and North Carolina.

The other pathway (“high performance”) cuts costs mostly as a result of breakthroughs on the supply side, especially new module hardware that is more efficient, durable, and reliable. Thanks in part to Chinese government subsidies, the dominant solar cell material today is crystalline-silicon (c-Si), which is approaching a performance ceiling. Newer materials, like perovskites, offer capacity and application benefits, but they are costlier, and the global know-how and supply chains to support them are not well-developed. To enable this pathway for solar PV technology, the United States will have to continue to invest in targeted RD&D and support for manufacturing innovation.

As the DOE report notes, neither of the two pathways to very low solar costs is a given. In light of the intrinsic uncertainty of innovation and energy markets, we should be betting on both with a comprehensive solar PV innovation policy. It should take a whole-of-systems approach, improving the technologies’ physical characteristics while pushing process innovation by strengthening demand as well.

The United States has made good progress developing and deploying low-cost renewable energy. But the modeling is clear: Building a reliable grid that will serve as the backbone for a cleaner, more electrified economy without raising energy costs, will require technological improvements that drastically drive down the costs and improve performance. Telling Americans that the nation can make this transition with today’s technology without paying more for energy is not only misleading, but it makes it harder to generate support for innovation policies. While the great innovation versus deployment debates is largely over, we must not lose sight of the continued need for public policy to help lower the cost of low-carbon resources through innovation.