Last year the U.S. Senate passed the U.S. Innovation and Competition Act (USICA), and the House recently introduced its related America COMPETES Act. Both contain important measures to restore, retain, and grow U.S. innovation-based competitiveness over China—including the CHIPS Act to support semiconductor production. Let’s hope that the House bill passes soon and gets quickly resolved in conference before going to the president’s desk for his signature.

However, one area the Senate and House conferees will have to address is the significantly different approach the two chambers have taken to a proposed National Science Foundation directorate that will focus on technology and innovation. The Senate conferees should hold firm on their version, as it is significantly superior to the House version in the ways it would help the nation meet the technological challenge from China.

The Senate version of the directorate supports key research and commercialization efforts in ways that will complement the rest of NSF but function differently than the traditional basic-research-focused programs whose main job is to respond to scientists’ proposals for research funding.

In contrast, the House’s version of the Directorate places a much stronger focus on advancing social equity, rather than technology competitiveness with China or other rivals. Moreover, the legislative language makes clear that the directorate should be subservient to and almost separate from the rest of NSF, lest its focus on actual results corrupt the pure mission of NSF.

In ITIF’s view, if the goal is to ensure U.S. technology leadership, especially over China, then the Senate’s version of the new NSF Directorate is vastly superior.

In spelling out the new directorate’s mission, the Senate bill is clear in setting the first and second priorities as, “Strengthening the leadership of the United States in critical technologies,” and, “Addressing and mitigating technology challenges integral to the geostrategic position of the United States.” The bill also calls on the directorate to invest in a number of key technologies critical to national competitiveness.

In contrast, the House bill says the mission is to “advance research and development solutions to address societal and national challenges for the benefit of all Americans.” The stated purpose of the directorate leaves out any mention of competitiveness. Instead, its function is to:

support use-inspired research, accelerate the translation of Foundation-supported fundamental research and to advance technologies, facilitate commercialization and use of federally funded research, and expand the pipeline of United States students and researchers in areas of societal and national importance.

In other words, the mission is not to change the focus of NSF, which funds basic research in virtually any area academic scientists are interested in; it is to help get the results of that research better used, leaving the scientists free to continue doing what they have been doing.

The two bills have very different visions of what kind of research to support. The Senate bill enables a broader conception of types of research activities, including to:

support basic and applied research, and technology development of such research, including through awards to individual researchers, entities, or consortia and through diverse funding mechanisms and models.

The Senate’s version of the directorate can solicit “proposals from entities to conduct research in areas of particular promise within key technology focus areas, especially areas that the private sector or the federal government are not likely to undertake alone.” In other words, the focus will not be decided by individual academic researchers; it will reflect key national priorities. Perhaps most importantly, in the Senate bill, the criteria for making awards include “the consideration by the applicant of future commercial applications of the project, including the feasibility of partnering with 1 or more commercial entities.” In addition, a criterion for awards includes “the potential impact of the project on the economic security, national security, or technological competitiveness of the United States.”

While the House bill mentions competitiveness, the focus is much broader. The legislation states:

In addition, the House focus is much broader to include support for “use-inspired and translational research.” This preserves the prerogatives of scientists to decide what to work on, as it could mean pretty much everything that NSF principal investigators do now.

In the Senate proposal, when the directorate awards funds, it must give preferences to “the amount of funds from industry organizations.” This is important because, without this industry buy-in, universities claim that their work is of relevance to industry, but usually it’s not. The House bill makes no such requirement.

The Senate bill requires “metrics related to commercialization for an award under this section.” The House bill omits any such accountability measures.

We see the differences between the bills in how they address the qualifications of the new assistant director to lead the directorate. The Senate bill calls on the NSF director to select someone who knows “matters pertaining to research, development, and commercialization at the Foundation, including partnerships with the private sector.” (Emphasis added.) In addition, the director should have a varied background, including in industry.

In contrast, the House bill simply says the assistant director should be qualified to “advise the Director on all matters pertaining to use-inspired and translational research, development, and commercialization at the Foundation.”

Funding is where the differences between the two versions of legislation are most stark. The House bill could not be clearer: It shunts the technology directorate to the side, with its budget quite limited compared to the “real” NSF’s budget. In the House bill, by FY26, the directorate would receive just $3.5 billion, 19 percent of the NSF budget. In contrast, the Senate’s USICA would authorize $9.3 billion for the directorate, which would account for 43 percent of the NSF budget. In other words, almost half of NSF would be focused on this core competitiveness mission. 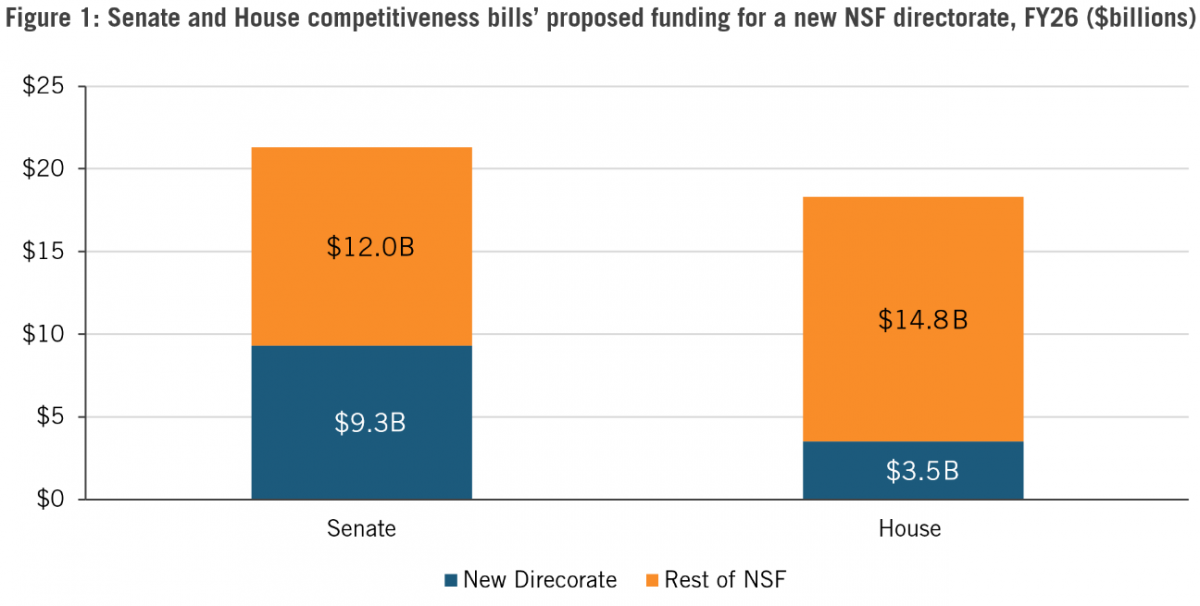 There should be no doubt that the differences in the two proposals are not simply technical. They are grounded in important differences about the optimal structure of U.S. science policy, with one vision being that the science community should have close to ultimate control to study what it wants with federal funding and have no accountability requirements (other than to abide by the law and ideally be published in a peer-reviewed journal), and the other vision wanting to align science policy with goals of technological innovation and competitiveness.

Ever since the creation of NSF in 1950, the scientific community has resisted anything that smacks of direction or threatens to interfere with curiosity-driven research. Since the publication in 1945 of Science, the Endless Frontier: A Report to the President on a Program for Postwar Scientific Research, by MIT’s Vannevar Bush, the science-based framework has dominated. As Bush noted, “Scientific progress on a broad front results from the free play of free intellects, working on subjects of their own choice, in the manner dictated by their curiosity for exploration of the unknown.” The report mentions science 119 times but technology just 5. In this view, innovation is a linear model, with science inputs going in at one end (defined by individual scientists) and innovation automatically coming out the other.

The university science community uses the “Bush Bible” to resist any and all intrusions from the state to direct their work. Rep. George Brown Jr. (D-CA), chair of the House Committee on Science, Space, and Technology in the 1990s, and a strong supporter of a national technology policy, noted that Science, the Endless Frontier “has often been invoked by the academic research community as an almost biblical command for robust, no-strings-attached federal support of scientific research.”

That approach may have worked when the United States led the world technologically and few nations or foreign firms had the capability to use and build on its global public good investment in basic science. But it does not work now. Basic science spills over internationally much more than applied research and technology development do, and one of the biggest beneficiaries is China.

A technology-based view of innovation argues that basic science is just one input, and that good policy entails more than supporting investigator-led basic research. It requires links with industry. It requires funding to be aligned with key national goals. It involves directly supporting industry technology and production efforts. It means supporting engineering, not just science. And it means giving more support to areas of science critical to competitiveness, such as computer science.

There is an additional source of difference between the two bills, and that relates to the primacy of different goals. The goal for most senators who voted for USICA was to help ensure national and economic security, especially against China. The goal for at least some House members was to foster greater social equity, using science policy as a tool. As one liberal commentator stated: “What does outcompeting China in new technologies—as Senators Schumer and Young seek to do—mean if we fail to advance American ideals of equality, justice, and opportunity?” In other words, some progressive Democrats see America’s new technology policy as one in which science must serve social equity goals more than competitiveness goals. Yet, to meet the social and equity goals they desire, the United States must possess a world-leading economy that’s highly competitive in high-value-added, often tech-driven sectors that support good-paying jobs and a tax base that makes it possible for the government to invest in their desired programs.

We are a critical pivot point in the nation’s history where we have to choose—to maintain a lead over what could very likely be America’s greatest economic, military, and national security rival since the War of 1812, or to focus instead of social policy. A bill with the title of America COMPETES should focus on the former. Addressing the latter, can and should be done through other legislative vehicles, such as raising taxes on the wealthy, passing a higher minimum wage, expanding unemployment insurance coverage, and other measures to boost opportunity. But absent a globally competitive U.S. economy, achieving increased economic opportunity will prove difficult.

The Case for Legislation to Out-Compete China