The United States is continuing to drift in the wrong direction when it comes to federal funding for research and development (R&D). We parsed the numbers last year in a blog post that showed a five-decade-long slide had been accelerating since 2009. Now we have another year’s worth of data, and the picture is getting worse. At this pace, ITIF estimates the United States will fall behind China in R&D investment by 2021.

The federal government now invests approximately $125 billion per year in R&D for everything from agriculture to human health, national defense, manufacturing, and energy. Unfortunately, despite a modest uptick in the nominal value of federal support for R&D, the overall trend is a long and steady decline as a share of GDP—the more relevant measure. Indeed, in 22 of the 28 years following 1990, federal R&D spending has made up a smaller share of GDP than the year before, sinking to just 0.61 percent of GDP in 2018, the lowest level since 1955, according to the latest data from the National Science Foundation. So, as was the case last year and it remains true today: The U.S. government invests less in R&D compared to the size of the economy than it has in more than 60 years… and counting. There should be no question that this has resulted in stagnant productivity growth, lagging competitiveness, and reduced innovation.

To understand just how far off the pace recent federal funding for research has been, the graph below shows the recent fiscal year’s funding levels would need to increase to match prior year R&D-to-GDP levels. To match levels of the 1980s, for example, funding today would need to increase by about 80 percent, or $100 billion per year. 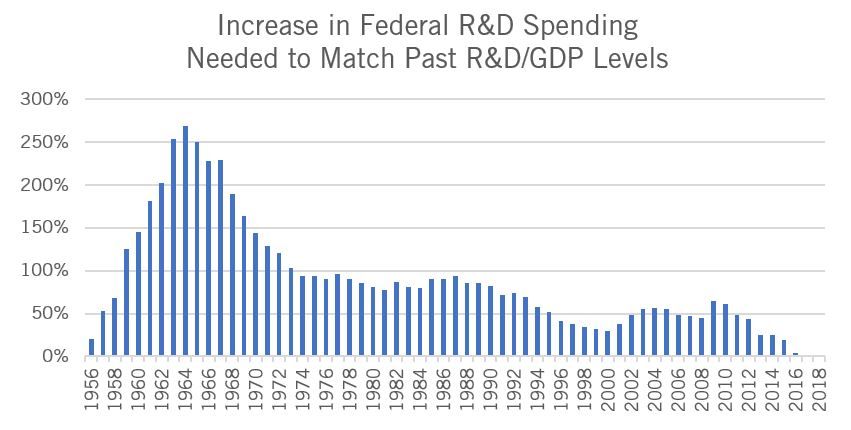 In contrast, U.S. businesses have dramatically increased their R&D investments in the last several decades. Business R&D as a share of GDP surpassed government R&D in 1981. In 2017, businesses in the United States invested the equivalent of 1.94 percent of GDP in R&D. In 17 of the 27 years following 1990, business R&D rose as a share of GDP, with declines occurring after 1991, 2000, and 2008 in the wake of recessions. However, most of this increase is in later stage “development” and not in riskier basic and applied research, where business investment remained level between 2000 and 2014. 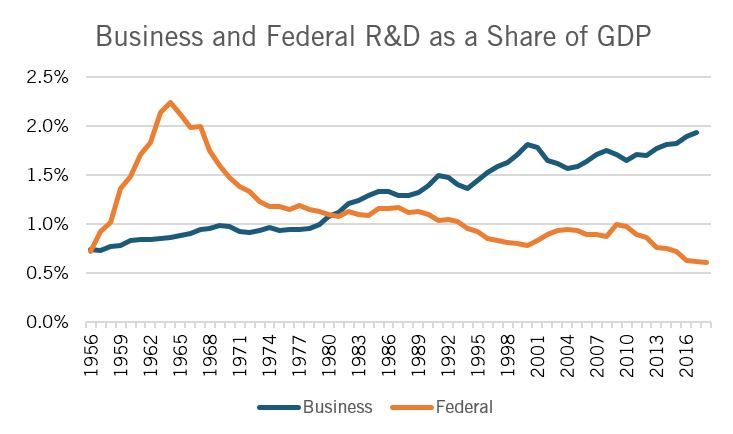 At first glance, the opposing trends of government and business R&D might seem to imply that R&D investment trades off between the two, with government funding crowding out private research. But scholarly research shows that the opposite is true. Not only do firms still need to perform their own R&D to stay ahead of their competitors, government R&D often “crowds in,” leading firms to invest more than they would otherwise when the government does the same. Unlike sectors in which government action would undercut or drive out private firms, public investments in research make private investments more productive. Research discoveries increase the public knowledge base, providing more lines of research that firms could turn into innovative products and allowing researchers to execute their own projects more efficiently. For example, the development of the Internet not only spawned countless commercial opportunities for businesses, it also allowed other research to be more productive by providing much greater access to academic databases and facilitating collaboration.

Moreover, even with the large increases in private R&D, the private sector underinvests in research compared to what is societally optimal. When companies invest in R&D to develop a product or a production process, they can almost never retain all the benefits of that research, even if they patent the discovery. Competitors and others learn about the research and discoveries and can capitalize on it. In other cases, the benefits to society are much greater than the revenues the firm can charge. To maximize societal welfare, firms should continue to expand investments in R&D until the marginal total benefits (the benefits to the firm, to other firms, and to society at large) falls to the cost of capital. But because firms rightly don’t consider external benefits, firms underinvest in R&D from a societal perspective.

Public R&D is also crucial for the United States’ position in the global economy because many of the benefits of research are concentrated domestically. Federal R&D funding makes it more likely that firms in the United States are the first to leverage new discoveries, giving them advantages over international competitors. Thus, anemic government R&D spending is particularly concerning in the light of increases by other nations around the world, especially our adversaries. For example, OECD data shows that China has almost entirely closed the gap on R&D spending, increasing public R&D by 0.09 percentage points and business R&D by 0.95 percentage points as a share of GDP between 2003 and 2017, while U.S. government R&D fell by 0.32 percentage points and business R&D rose by 0.32 percentage points over the same period. 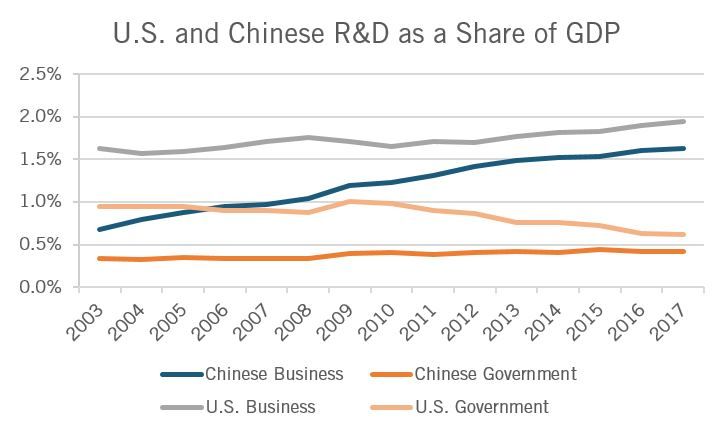 China’s growth is even more dramatic than those figures would reveal, due to China’s dramatic GDP growth over this period. In fact, in absolute and purchasing power parity terms (controlling for each nation’s cost of living), China’s government R&D has increased by 330 percent from $23 billion to $98 billion while U.S. government R&D grew by just 2 percent from $121 billion to $124 billion. Chinese business R&D increased by 726 percent while U.S. business R&D grew by 39 percent. This means that in PPP terms businesses in China now invests more ($379 billion) per year than firms in the United States $345 billion. In total, the U.S. still leads, investing $543 billion in R&D in 2017 to China’s $496, but that is a far cry from 2003, when the U.S. invested over five times as much as China. If current trends continue, we estimate that China will outspend the U.S. overall in 2021, and that China’s government R&D will surpass U.S. government funding in 2023. 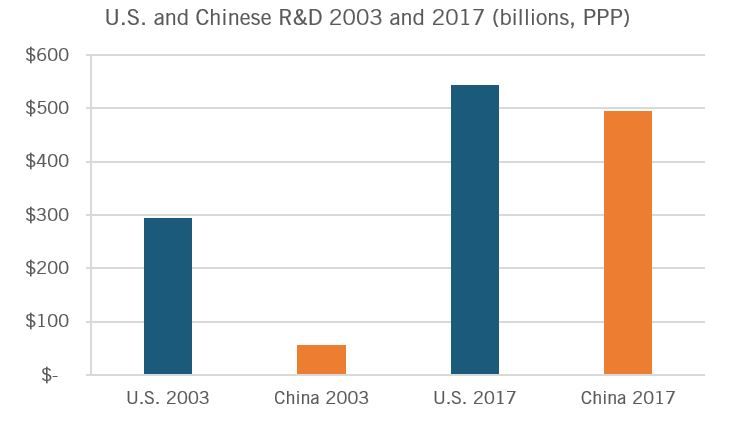 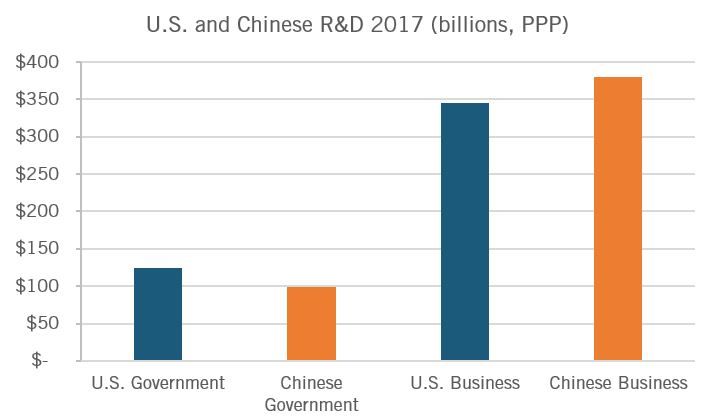 The United States continues to run a budget deficit, but trying to address it by sacrificing federal R&D investment is pennywise, pound foolish in the extreme, given the returns that R&D deliver. The country faces daunting strategic and economic challenges for which technological advances and innovation are the only viable solutions. Federal support for R&D is a critical catalyst to those ends, so it is long past time for both parties to step up to the plate and reverse decades of stagnating public R&D investment.