How and When Regulators Should Intervene | ITIF
Skip to main content

How and When Regulators Should Intervene

Daniel Castro Alan McQuinn February 2, 2015
February 2, 2015
View Report
This report proposes that as regulators contemplate weighing punitive actions on companies that they incorporate a typology based on the companies’ intent and the harm they caused.

Regulatory oversight keeps companies in check, promotes fair competition, and upholds consumer protections. However, regulators can also go too far and overzealously target companies acting in good faith. Such actions are not just unfair, but they also divert companies towards needless compliance at the expense of useful product advancements. Policymakers must get regulation right to protect competitiveness in the innovation economy. This report proposes a typology that regulators can use when evaluating which infractions should be pursued and what type of penalty should be administered based on a sliding scale of intent and resulting harm. The report argues that smaller penalties should result when consumers are not harmed and the company acts unintentionally, while larger penalties should result when consumers are harmed by a company’s actions and that company acted with intent.

The report then analyzes four case studies involving past or possible Federal Trade Commission action against companies—including Amazon, Google, Path, and Uber—each corresponding to a square in the below table. 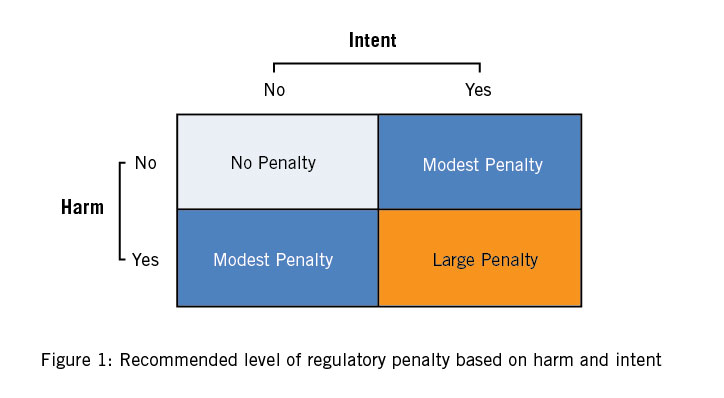